Abnormal productions of amyloid beta (Aβ) plaque and chronic neuroinflammation are commonly observed in the brain of patients with Alzheimer's disease, and both of which induce neuronal cell death, loss of memory, and cognitive dysfunction. However, many of the drugs targeting the production of Aβ peptides have been unsuccessful in treating Alzheimer's disease. In this study, we identified synthetic novel peroxisome proliferator-activating receptor (PPAR) agonist, DTMB, which can ameliorate the chronic inflammation and Aβ pathological progression of Alzheimer's disease. We discovered that DTMB attenuated the proinflammatory cytokine production of microglia by reducing the protein level of NF-κB. DTMB also improved the learning and memory defects and reduced the amount of Aβ plaque in the brain of 5xFAD mice. This reduction in Aβ pathology was attributed to the changes in gliosis and chronic inflammation level. Additionally, bulk RNA-sequencing showed that genes related to inflammation and cognitive function were changed in the hippocampus and cortex of DTMB-treated mice. Our findings demonstrate that DTMB has the potential to be a novel therapeutic agent for Alzheimer's disease. 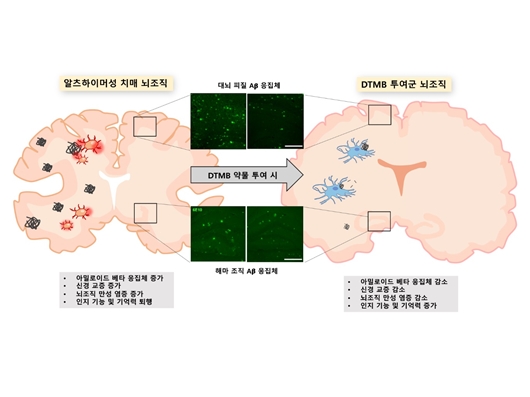