Chloroplasts and mitochondria are subcellular organelles that evolved from cyanobacteria and α-proteobacteria, respectively. Although they have their own genomes, the majority of their proteins are encoded by nuclear genes, translated by cytosolic ribosomes, and imported via outer and inner membrane translocon complexes. The unfolding of mature regions of proteins is thought to be a prerequisite for the import of the proteins into these organelles. However, it is not fully understood how protein folding properties affect their import into these organelles. In this study, we examined the import behavior of chloroplast and mitochondrial reporters with normal green fluorescent protein (GFP) and two GFP variants with enhanced folding propensity, superfolder GFP (sfGFP) and extra-superfolder GFP (esGFP), which is folded better than sfGFP. sfGFP and esGFP were less dependent on the sequence motifs of the transit peptide (TP) and import machinery during protein import into Arabidopsis (Arabidopsis thaliana) chloroplasts, compared to normal GFP. sfGFP and esGFP were efficiently imported into chloroplasts by a mutant TP with an alanine substitution in the N-terminal MLM motif, whereas the same mutant TP showed a defect in importing normal GFP into chloroplasts. Moreover, sfGFP and esGFP were efficiently imported into plastid protein import 2 (ppi2) and heat shock protein 93-V (hsp93-V) plants, which have mutations in atToc159 and Hsp93-V, respectively. In contrast, the presequence-mediated mitochondrial import of sfGFP and esGFP was severely impaired. Based on these results, we propose that the chloroplast import machinery is more tolerant to different folding states of preproteins, whereas the mitochondrial machinery is more specialized in the translocation of unfolded preproteins. 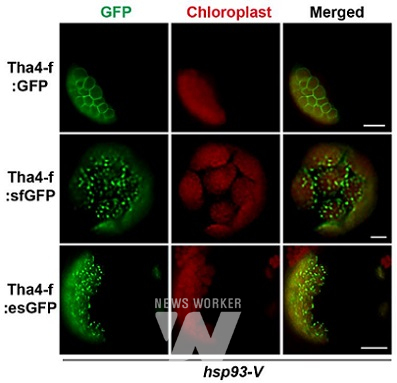